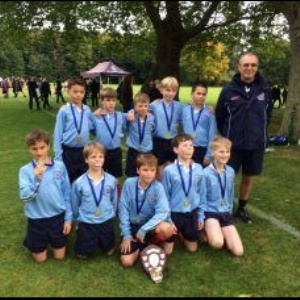 Dame B's team played some excellent tournament rugby to be crowned Culford Champions for 2016. During all of their matches, they pressurised the opposition when they were in possession and limited their opportunities to score.

In the group stage the Dame B's team defeated teams from St Margaret Scool, South Lee's School and Culford School AlphaTeam. The free flowing style of play was limited by the narrow pitch but Dame B's handling skills and their defensive tackling enabled them to out score the opposition.
Dame B's emerged as the best performing team in their group and were to meet Finborough School in the final game of the tournament.

The last game was a very tense affair. Dame B's took the lead but were pegged back by Finborough.
The game ebbed and flowed and with the final seconds approaching Dame B's attacked and with Max W being tackled short of the line, a supporting player picked up the loose ball and dotted the ball over the try line to score the winning try. A fantastic achievement by all of the boys.