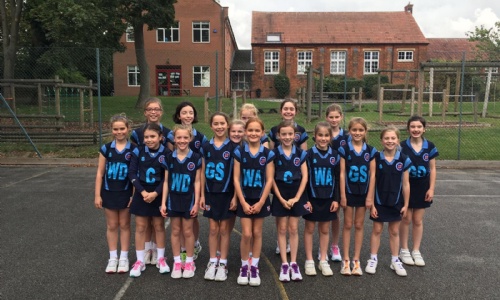 The U11 A and B team took to the netball court to play against Widford Lodge. Both matches were very competitive and played in excellent spirit. The A team secured a superb 22-7 victory and can be very proud of their performance. Isabel Rumsby was awarded player of the game. The B team lost narrowly 9-8 in a very tight match that was end to end. All the girls played well with Kitty Tilston being awarded player of the game.
The U10 rugby team put in a spirited second half performance to try to contain the free scoring Widford Lodge team. After a disappointing first half by Dame B's, improved ball handling and support play was needed. A much improved second half performance saw Dame B's start to compete with the visiting side and we managed to cross the try line in the final play of the game. Moving forward, we must eliminate the unforced errors and improve our support play of the ball carrier. MOM- Louis Welch for his never say die attitude and willingness to put his body on the line for his team.

The U11B team ran out comfortable winners by 8 tries to 4. Some excellent ball handling, powerful running and rucking, saw Dame Bs produce a powerful performance against their opponents. Widford put in a spirited second half performance crossing the try line early on to narrow the scores but excellent running with ball in hand from George Morgan and Ned wWhooley ensured Dame B's ran out comfortable winners. MOM- Ned Whooley for his strong running with ball in hand, crossing the try line 5 times.