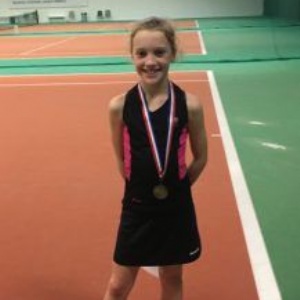 Congratulations to Daisy Whooley who recently won both the U9 and U10 girls club champs tournament at David Lloyd, Cambridge. As a result of her success at the club championships, Daisy went on to represent the club at the regional finals in Enfield last weekend. Ina tough afternoon of competition, she got through to the semi finals in the U10 category on Saturday and won the U9 competition on Sunday. She will now go on to represent Cambridge in the David Lloyd national finals on December 4th at Raynes Park. Good luck Daisy.