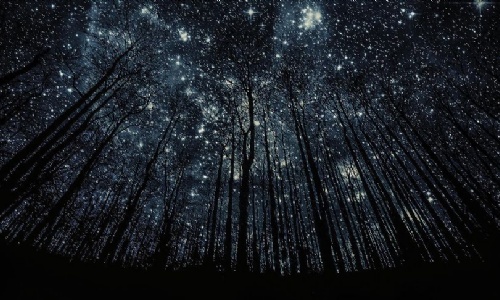 Over 60 parents and pupils donned their waterproofs, hats, gloves and scarves and were bussed to our forest school site for an evening on Nocturnal Adventures last Friday night.
An intrepid band of Dame B's staff showed great spirit. Substituting the usual race for the car park at the end of the school day on Friday, they headed over to the forest school site and set themselves up for the eager adventurers.

Activities included a night time walk with a thermal camera. The intention was to capture unaware night time animals; the likes of tawny owls, badgers and deer were undoubtedly going to be in abundance, but it seemed that our stampeding horde of happy revellers kept these shy creatures well away!

A game of “capture the flag” on the meadow proved to be a highlight for many. It was inspiring to watch so many willing parents throw themselves to the floor in the pouring rain and drag themselves across the ground, all in the name of escaping the searching spotlight.

There was a story tent which offered a very welcome respite from the driving rain. Tales from space were delivered to the older participants, while the younger groups also enjoyed some stories about night time animals.

The heavy cloud cover certainly put paid to the chance of spotting Orion standing proudly in the sky or counting the stars of Ursa Major. The telescopes offered no more use than a pair of well-placed hat stands; however, the children enjoyed recreating some of these celestial masterpieces on the meadow using electric tea lights.

On venturing into the woods groups were treated to some campfire songs. The campfire provided an inspiring backdrop for our parents and children to wax lyrical. The woods offered another fire where a much-needed sugary pick me up was on offer in the form of

There was an animal eye spotting activity for our younger members on the night. The children thought about the relative size and distance for the eyes of some of our night time friends. Armed with torches the children searched out the eyes (military grade reflective tape, cut out and placed at appropriate heights on trees) and matched them up to the correct night time animal.

Mr Wright was ably helped by Margaret and both need a special mention. They kept the charcoals alight and they were in a constant state of readiness, handing out hot dogs and hot chocolate to some very soggy looking customers. It would be unfair to say that standing that close to a glowing fire gave them the ‘best seat in the house’ (that seat was clearly already taken by Mrs Wells and Miss Terry in the story tent!).

The children were on great form during the evening and the parents showed an excellent level of support to both their children and the evening's activities. The evening was a total washout, but to quote one of our parents ‘the rain just added to the overall sense of adventure!’

This event, as well as our weekly jaunts to the forest school, could not go ahead without the generous use of the grounds. A huge thank you to Dr Jo Burch (past parent and school governor).